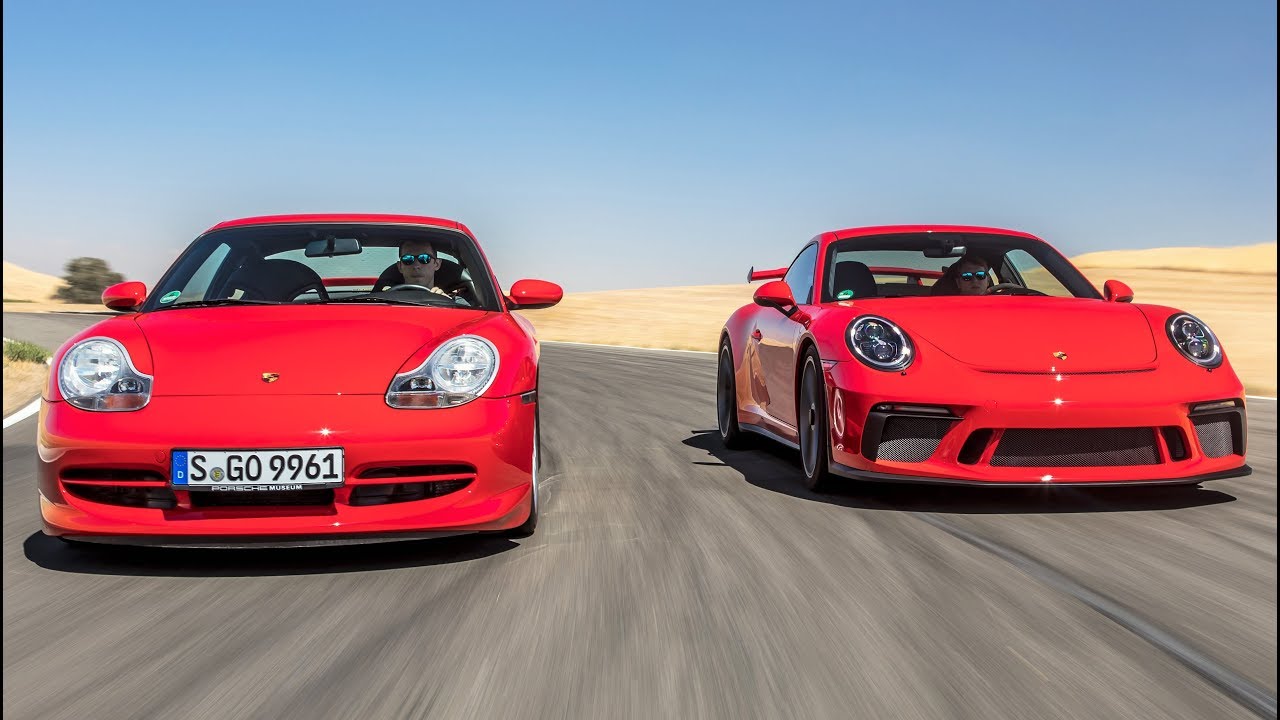 Four years later, the 911 GT3 received significant updates, and was offered in North America for the first time. Based on the facelifted 996 generation 911, horsepower grew to 381, torque rose from 273 to 285 lb-ft, and the redline climbed to 8,200 rpm. This was possible by updating the engine with longer titanium connecting rods, lighter pistons, the variable camshaft adjustment system VarioCam, and lighter intake and exhaust valves. As a result, the 2004 model year 911 GT3 accelerated from 0 to 60 miles per hour in 4.3 seconds, and achieved a top track speed of 190 miles per hour. The car remained paired to a six-speed manual transmission, albeit with modified ratios for gears five and six. In addition to restyled fasciae, a new rear wing and updated wheel design, this model featured wider front and rear tires. Underscoring the effort of the Motorsport department to save weight wherever possible, the new wheel/tire combination saved 2.2 lb in spite of the increase in size thanks to flow-formed wheel technology. Larger front brake rotors, up from 330 mm to 350 mm, and 6-piston calipers increased pad-to-rotor contact by about 40 percent. As an option, Porsche Ceramic Composite Brakes (PCCB) with carbon-ceramic brake rotors was available for the first time in the GT3, taken from the 996-generation 911 GT2.

Introduced in 2013 for the 2014 model year, the 911 GT3 based on the newly introduced 991-generation adopted one of the biggest advancements in performance and technology ever seen on a road car: the seven-speed Porsche dual-clutch transmission (PDK). It had already been available on the 911 Carrera and Turbo variants of the previous generation, but was significantly modified to suit the characteristics of this race-bred model and fitted as standard. Lighter gear sets reduced the weight of the unit by about four pounds compared to the standard 911 Carrera models, and the gear ratios were shortened to suit the high-revving nature of the naturally-aspirated 475 hp 3.8 liter flat six which featured direct injection for the first time and revved to an impressive 9,000 rpm. Top track speed was 195 mph, reached in seventh gear. Due to the Launch Control feature and lightning quick shifts of less than 100 milliseconds, the 0 to 60 mph time dropped significantly to just 3.3 seconds. The track performance of this latest 911 GT3 also benefited from the new 991 platform. Track widths and body stiffness increased, PASM system advanced, and standard center-lock wheels were made of forged aluminum for the first time while increasing to 20-inch diameter. They were fitted with the latest generation of UHP-tires, and rear axle steering was added as standard for the first time on the GT3. This innovative technology, shared with the 918 Spyder and 911 Turbo, steered the rear wheels in opposite direction of the front wheels at speeds of up to 31 mph to increase agility and reduce the turning circle.

7:12.7 minutes: The lap time of the current 911 GT3 represents roughly 45 seconds of improvement at the ‘Ring compared to the original model. A world of difference. The new 4.0-liter engine develops 500 hp and a healthy 346 lb-ft of torque. A new crankshaft, larger main bearings, thicker connecting rod bearings, plasma-coated cylinder liners as well as a new oiling system that supplies oil directly into the feeder bore of the crankshaft take the durability of the engine to new heights. Like on a racing powertrain, valve train clearance is set at the factory using shims and does not require adjustment. Breathing of the engine is improved thanks to larger ram air ducts on top of the rear decklid cover. Downforce grows 20 percent compared to the previous model to a total of 340 lbs. (155 kg) at the top track speed of 198 mph. This improvement is made possible by a new front fascia featuring lateral air blades, a special front spoiler lip, a new rear underbody diffusor, and a prominent rear wing which sits 0.8 inches higher than before. Special lightweight touches include front and rear fasciae made of lightweight polyurethane and a rear decklid made of carbon fiber composite, including the hinges. Catering to the purists, a six-speed manual transmission was re-introduced as a no-cost alternative to the standard seven speed PDK. This is also the exclusive transmission for the 911 GT3 with Touring Package, which was first shown in September 2017. The Touring Package retains the engine and suspension from the 911 GT3, but deletes the fixed rear wing in favor of an automatically controlled rear spoiler from the 911 Carrera Cabriolet models, fitted with an additional Gurney flap. Chrome accents and cloth seat inserts replacing the Alcantara upholstery lend a more subdued touch to the model.