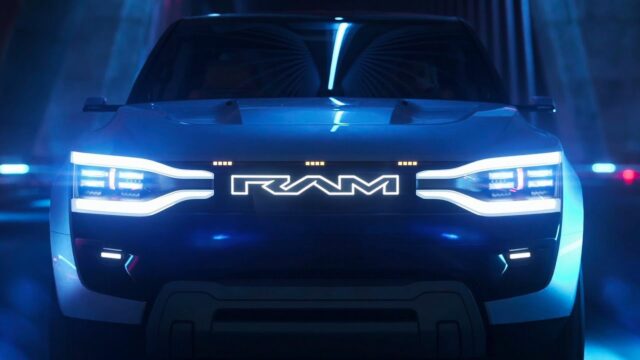 Ram 1500 Revolution Reveal – The Future of Ram Trucks / Great features. While Ford is busy churning out thousands of F-150 Lightnings from its Dearborn, Michigan plant and Chevy is readying the Silverado EV for its launch this year, Ram had so far stayed out of the electric-truck arms race. But now at the 2023 Consumer Electronics Show, Ram has unveiled the 1500 Revolution BEV concept, previewing an electric 1500 pickup that will arrive in 2024 and giving the first hints at the future stylistic direction of the brand.

The concept sports a sleek look, with a stretched wheelbase and a swept-back windshield. The blacked-out front end is dominated by an illuminated “RAM” badge sitting between the LED headlights, which Ram refers to as having a “tuning fork” design. The beefy skid plate in the bumper hides integrated tow hooks, and the taillights and Ram badge on the tailgate also consist of LEDs.
The Revolution is decked out with a powered frunk, a charge port, flush door handles, side steps, and a rear step, and we expect most of these features to reach production, at least on pricier trims. The tailgate can also be opened outwards—like barn doors—to extend the bed another couple of feet in order to haul larger loads.

The concept also shows off coach doors—the rear doors open in the opposite direction to the front doors—allowing Ram to remove the B-pillar to ease ingress and egress. We imagine these flashy doors will be ditched for production, but the 3D-printed, lightweight cameras which replace the sideview mirrors could make it if U.S. regulations change. The 1500 Revolution rides on 35-inch tires wrapped around 24-inch wheels, with light-up center caps that remain still while the wheel spins, like on Rolls-Royces.

The cabin is four inches longer than on the current gas-powered truck and features “Ram Track,” a rail attachment system on the floor that permits for flexible interior configurations. The rails also act as tie downs for cargo and are also found in the frunk and bed. The lightweight seats—which have integrated seatbelts, grab handles, and speakers—can be folded completely flat or removed.

The two rows of seating can also be supplemented by third-row jump seats, which Ram says are mounted in the powered mid-gate and can be affixed in the bed, echoing the Subaru Brat of the late 1970s. Unfortunately Ram didn’t provide any photos showing the jump seats, but the mid-gate is also said to include a pass-through that extends all the way to the frunk—an idea previously seen on the Bollinger B2—and can fit objects that are 18 feet long.

Continuing on the theme of cabin customizability, the center console can be removed to increase interior room, while the armrest converts to a desk. The “tuning fork” design reappears on the dashboard via orange ambient lighting, which flows behind a dual display setup totaling 28 inches of touchscreen. The lower screen can be removed and used as a tablet or adjusted into three different positions—minimal view, extended view, and full screen view—while the upper screen can also apparently slide on the Ram Track system.

As is expected of an electric truck concept, the interior is overflowing with fancy tech, from a 360-degree camera system to an AI-powered voice-activated assistant and augmented reality in the head-up display. The octagonal steering wheel has small screens built in, while the glass roof has electro-chromatic panels that can individually adjust their opacity. Sustainable materials are also found throughout the interior, including leather made from a byproduct of the apple industry and a floor built from recycled rubber and cork.
Another neat feature on the 1500 Revolution is Shadow Mode, where the truck autonomously follows the driver as they walk ahead, which Ram says will save time for short trips around a job site. There are also several cabin modes that alter seating positions, ambient lighting, window opacity, suspension, and more at the press of a single button.

January 5, 2023
© AutoSportMotor
We use cookies to personalise content and ads, to provide social media features and to analyse our traffic. By clicking “Accept”, you consent to the use of the cookies. Learn More!
Accept
Manage consent