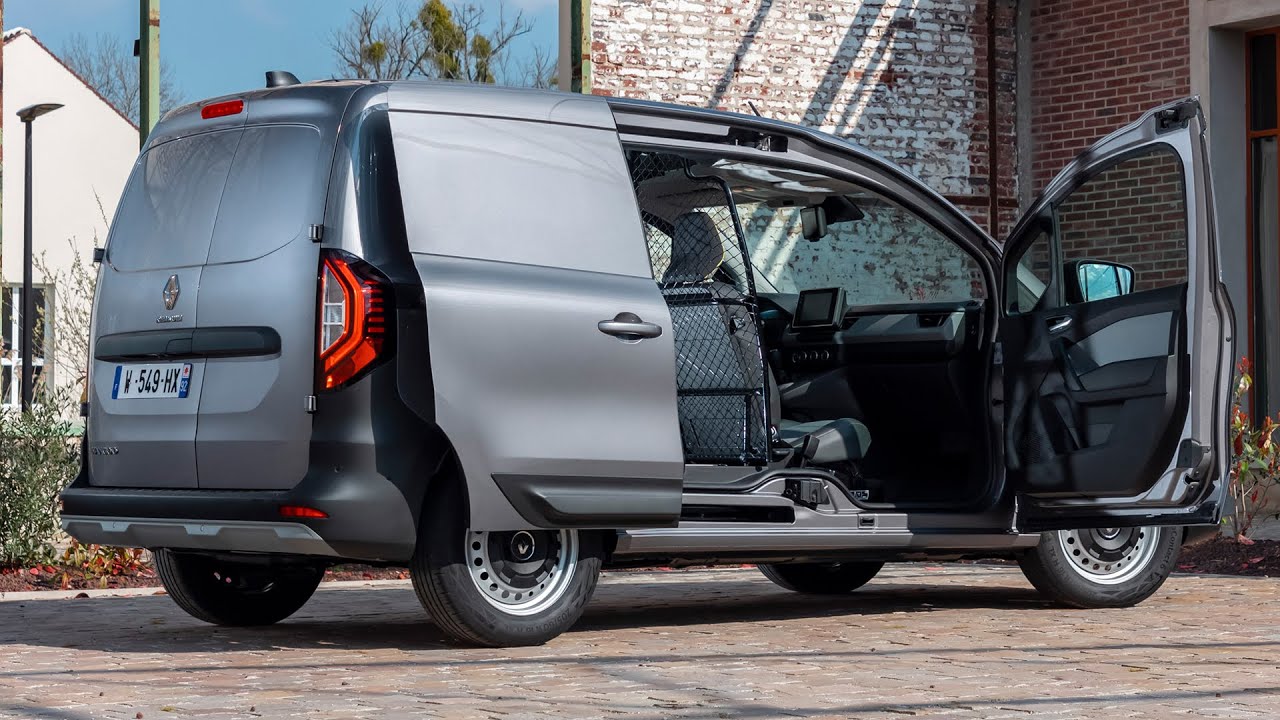 Renault Kangoo Van (2021) Features, Design, Interior and Driving. The third-generation Renault Kangoo has been revealed, with petrol, diesel and electric ZE versions on offer. It’ll be for sale in the UK from the summer. As well as a wide range of engines, the new Renault Kangoo also introduces a sliding door layout that’s unique in the CV sector.

Called Open Sesame, the new Kangoo features a sliding side door that locks to the cabin door, so the van’s B-pillar is eliminated completely, in a similar style to the now-defunct Ford B-Max small MPV. This allows for loading of longer items in tight spaces where it’s not possible to open the rear doors completely. It means there’s a 1,446mm side opening, and when combined with the flat-folding passenger seat, there’s a maximum load length of 3,550mm available in the long-body Kangoo Maxi. The Open Sesame system can be added to both sides of the van.

The Kangoo Maxi is based on the same platform as the Renault Scenic MPV, but while eliminating the B-pillars boosts access, safety isn’t compromised because the strengthening provided by the B-pillars has been transferred to the doors. Renault has tested the system thoroughly and confirms that there is no compromise for safety or torsional body rigidity.

As before, there are two Kangoo body lengths available, the standard van and the Kangoo Maxi, while a Crew Van will also be offered. Cargo volume is up to 3.3 cubic metres in the standard Kangoo, and there’s a floor length of three metres available, too.

The Maxi is 500mm longer than the standard van, while it also can be had with a one tonne payload. It has a cargo volume of 3.9 cubic metres and a 3.55-metre load length. Both vans will be available with smart storage solutions, including a roof-mounted rack for items up to 2.5-metres long (in the Maxi), while conversion firm Sortimo has created a pivoting rack system that takes advantage of the Kangoo’s Open Sesame system.

Drive comes from petrol, diesel and electric powertrains. The full UK range has yet to be confirmed, but there are 75, 95 and 115 versions of Renault’s BluedCi diesel, with six-speed manual or seven-speed EDC auto gearboxes on offer.

The Kangoo ZE features a new 44kWh battery (up from 35kWh in the previous generation), while maximum charging power of 75kW is on offer. Renault claims a WLTP range of 159 miles. A full charge from an 11kW wallbox takes 4hr and 30min, while a DC charge from a high-power source sees the battery charged from zero to 80 per cent capacity in 42 minutes. As before, the Kangoo ZE is available in standard and Maxi lengths, while all of the same storage and cargo area options will be available.

Other new kit includes an electric parking brake, which frees up space in the cabin, a wide-angle mirror set into the passenger sun visor to help reduce blind spots, and a rear camera system that offers a permanent view at the back, in place of a rear-view mirror. Since the new Kangoo is based on the same platform as the Scenic, safety kit is carried over from Renault’s passenger cars, too. Automatic emergency braking, lane assist, cross wind assist, trailer stability control and adaptive cruise control with traffic assist will all be available.