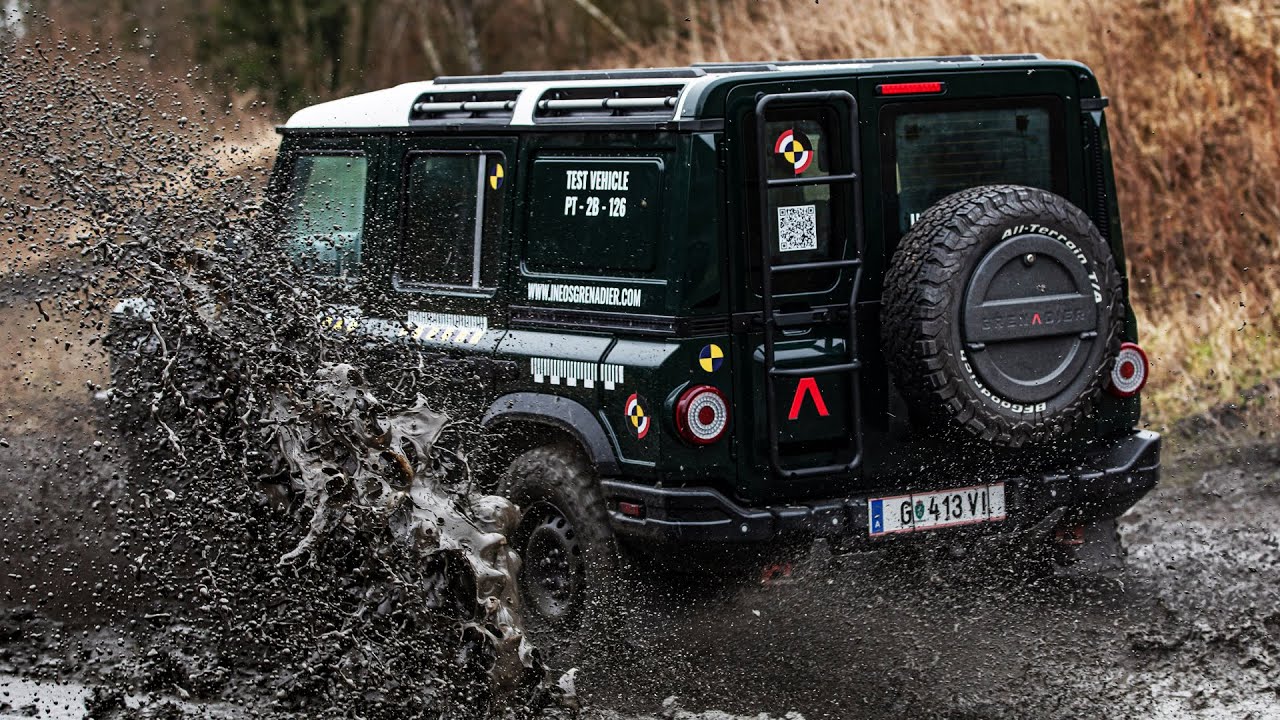 The INEOS Grenadier 4X4 SUV – Off-Road Test Drive. The Grenadier takes obvious inspiration from the previous Land Rover Defender, and looks to reinvigorate the concept of the original with modern tech. Like the Defender, it too features a square design, body-on-frame construction and beam axles, but the Grenadier is a ground-up project that shares no parts with the Land Rover. Orders open in April this year, with prices starting from around £48,000 for the commercial variant.

Behind that bluff nose lies a choice of 3.0-litre turbocharged straight-six engines from BMW – a diesel with 246bhp and 550Nm of torque, or a petrol version producing 281bhp and 450Nm, which we drove. Whichever you choose, drive is sent through an eight-speed ZF automatic gearbox, and there’s permanent all-wheel drive with selectable low range for serious off-roading. The centre diff is a mechanically locking item, with optional electronically actuated units on each axle.

Inside, the Grenadier is a clean-sheet design with a blend of contemporary tech and no-nonsense utility. The 12.3-inch infotainment system is also sourced from BMW and runs a re-skinned version of iDrive, and apart from the gear selector, the rest of the cabin is bespoke.

There’s no traditional gauge cluster, and the boxy dashboard architecture trades luxury for a hard wearing plastic construction. The control panel on the dashboard features large, clearly labelled switches for the climate and audio controls, designed for use with gloves, and the view out of the letterbox windscreen will be familiar to previous Defender owners – albeit with much more elbow room.

The Grenadier looks best caked in grime, and approaching our pre-production test car, it’s not short on presence. It’s a larger vehicle than an original Defender, and with black plastic cladding jutting out from the bodywork and optional off-road tyres, it looks even more purposeful. At over two metres tall you really do climb into the Grenadier, but the trade-off is 264mm of ground clearance and a usefully high vantage point from behind the wheel.

Aim the nose at the terrain, ease into the throttle and the turbocharged straight-six unit has little trouble shifting the SUV with its smooth torque delivery. The Grenadier immediately feels robust, and although soft mud doesn’t test structural integrity like a rocky track might, the cabin feels well isolated from the worst of the surface.

The progressive-rate Eibach spring and Bilstein damper set-up is compliant over large bumps, and coupled with impressive wheel articulation from the live axles, you get the sense that the car is maximising grip from all four tyres.

The Grenadier finds remarkable traction over the most challenging sections. Some patience is required while the car snakes around over the thick ooze, but it rarely runs out of ability. The Ineos was occasionally stopped in its tracks when scrambling up some slopes, but with a touch more commitment it scaled the trickiest inclines.

Shift to manual gearbox control, select first gear and the Grenadier is equally impressive on the way down. Using engine braking with feet off both pedals, the car crawls along safely without losing grip, and doesn’t catch the bodywork when it meets flat ground thanks to approach and departure angles of 35.5 and 36.1 degrees respectively.

Unsurprisingly, the steering felt eerily light over the slippery wet surface, but more of an issue was the steering wheel itself. While navigating tighter sections and working the wheel, the two-spoke design means it’s not easy to judge its orientation when applying armfuls of lock, despite the red stripe at the 12 o’clock position.

The Grenadier is genuinely impressive off-road, and with its sturdy ladder chassis, beefy body protection and hard-wearing interior, its utilitarian feel is far closer to the original Defender than the new one.

The bigger question is how it will perform on tarmac – the off-road focused componentry suggests that it could be compromised as an SUV for lifestyle-oriented buyers, so we’ll save our final judgement for the full road test.