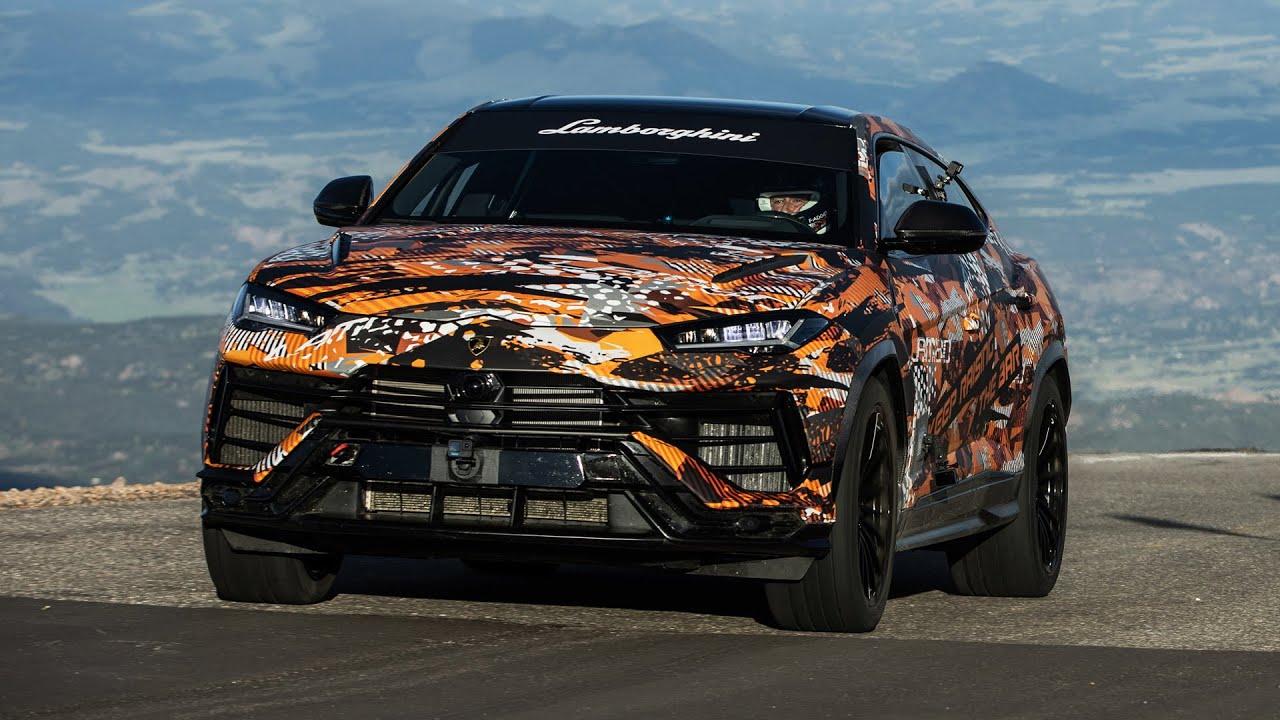 The new Super SUV Lamborghini Urus – a new king of the mountain. The Lamborghini Urus has set the production-SUV record at Pikes Peak with a 10:32.064 time.
That beats the previous record of 10:49.902 set by a 2018 Bentley Bentayga.
The record-breaking Urus, disguised in camouflage, is a new model that Lamborghini will reveal on August 19.

When it comes to production SUVs racing up Pikes Peak, there’s a new king of the mountain. It’s the supercar-bred Lamborghini Urus that recently posted a 10:32.064 time. That’s almost 18 seconds quicker than the 2018 Bentley Bentayga that previously held the production-SUV record with a time of 10:49.902. While the Lambo didn’t compete in the official event that was held at the end of June, its time was recorded by Pikes Peak’s official timekeepers.

As seen in the photos, the record-breaking Urus was wrapped in orange camouflage with the phrase “Keep Raising the Bar” on its flanks. It’s Lamborghini’s thinly veiled attempt to disguise the fact that it wasn’t just any old 641-hp Urus that broke the record. Rather, it’s a new model that will be revealed on August 19. Although major details about the upcoming Urus remain under wraps until then, Lamborghini does reveal a few things about the machine that conquered the storied hill-climb course.
Apart from the required safety equipment, which primarily includes a roll cage and a racing seat with a six-point harness, the Urus is essentially what folks will get with the production version. That includes the standard twin-turbo 4.0-liter V-8 as well as Pirelli P Zero Trofeo R tires, size 285/40R-22 front and 325/235R-22 rear. Lamborghini says it was involved in the development of that specific rubber, which is said to be the first time Pirelli has offered semi-slick tires designed for an SUV.

The man responsible for the setting the Pikes Peak record in the Lambo is driver Simone Faggioli. Along with being a Pirelli test driver, he’s also a hill-climb champion who still holds the rear-wheel-drive record that he set during the 2018 Pikes Peak International Hill Climb.
———
Hope you enjoy this video and leave your comment bellow. To stay up to date with alot of new Videos