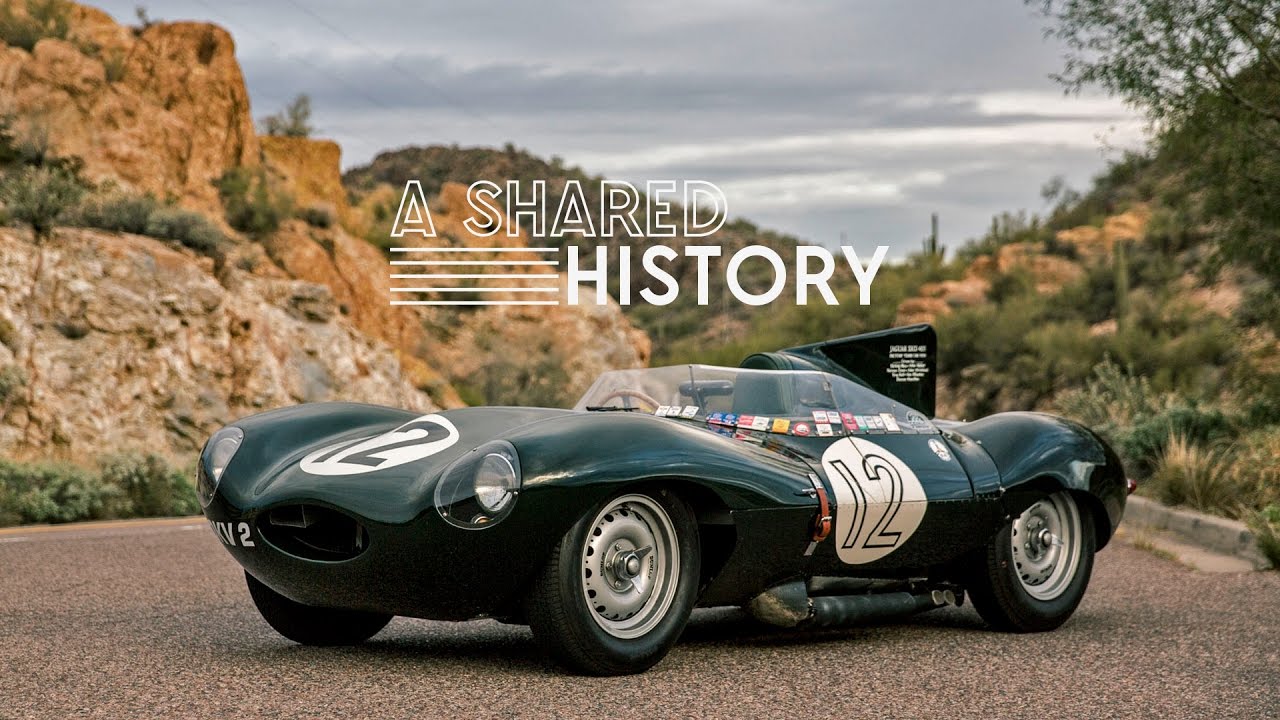 This 1954 Jaguar D-Type Represents A Shared History. There are cars with history, and then there is OKV 2. The second works D-Type to roll out of the factory in Coventry in 1954 was immediately handed to Stirling Moss, where he and co driver Peter Walker set fastest time in practice and a new record speed on the Mulsanne Straight. A chipper 172.97 miles per hour. It was the Lead Team car and one of only 5 Factory team cars to ever race at LeMans, the circuit the car was built to win.

Over the next few years the car would be held by the hands of sixteen of the most capable racing drivers of the era including 6 LeMans winners. Among those are Norman Dewis, Peter Whitehead, Mike Hawthorn, Tony Rolt, Ken Wharton and Duncan Hamilton just to name a few.

It went on to a very successful career in the mid to late fifties racing around the UK and European circuits, having more than 55 races with over half being top 3 finishes. Jaguar sold the car to Jack Broadhead for Bob Berry to race. Bob secured multiple podiums in period. In 1956 the car was painted a lighter BRG where it then placed 3rd at Silverstone and 1st at Goodwood. Berry crashed the car at Goodwood and it returned to the factory for rebuild. It was back racing 3 months later. During the 50s the car was prepared and cared for by the Jaguar Factory.

OKV 2 continued to be raced by a variety of drivers. In 1958 the engine was changed at the Works from E2004-9 to E2065-9. It then sold to Gerry Crozier. In 1960 it sold through the Chequered Flag to David Jaycox in Canada, for his Son who apparently did well in local street racing, leading to several speeding tickets and his Fathers quick decision to sell. Later owners included George Gordon, James Mace and Jim Catto. Jim Catto let a friend, Alistair Smith drive the car at Mosport Park. Unfortunately Alistair was killed in a low speed accident during practice. The car was not badly damaged and driven back to the pits. It sat in storage for the next 17 years until selling to Godfrey Miller in Canada.

In the early 80’s it sold to Lynx Engineering (UK) who described the car as in “amazing time warp condition”. OKV 2 was rebuilt and sold to James Wallis of Sevenoaks, UK. In 1995 it was sold to Robert Cooper of Gloucestershire, UK, and in 1999 sold to Terry Larson (USA). Terry’s first drive in the car was racing at the Goodwood circuit. Over the next 12 years Terry put over 20,000 miles on OKV 2 in numerous races and tours including the annual C & D Type Tour Terry and his wife organize. Terry reunited Norman Dewis with OKV 2 twice to drive at the Monterey Historics. He sold the car in 2011 and the current owner has continued it’s active racing history.

To say that the car we had the pleasure of filming for the Arizona Concours has history, to put it in the words of Terry Larson, “would be a massive understatement.”