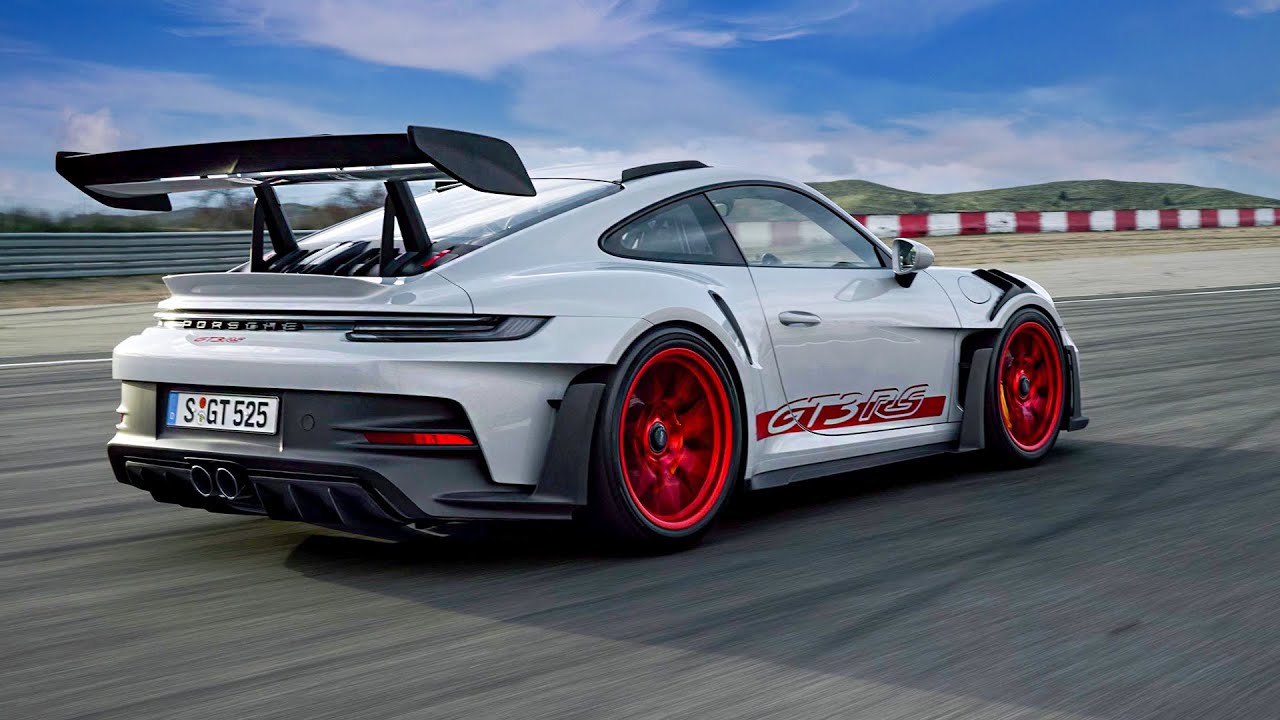 The basis for a significant performance boost is the concept of a central radiator – an idea that was first used in the Le Mans class-winning 911 RSR and subsequently in the 911 GT3 R. Instead of the three-radiator layout seen in previous cars, the new 911 GT3 RS relies on a large, angled centre radiator in the car’s nose, positioned where the luggage compartment is located on other 911 models. This has made it possible to use the space freed up on the sides to integrate active aerodynamic elements.

Continuously adjustable wing elements in the front and on the two-part rear wing, in combination with a number of other aerodynamic measures, provide 409 kg of total downforce at 200 km/h. This means that the new 911 GT3 RS generates twice as much downforce as its 991.2-generation predecessor and three times as much as a current 911 GT3. At 285 km/h, total downforce is 860 kg.

A drag reduction system (DRS) is fitted in a production Porsche for the first time. To achieve low drag and higher speeds on straight sections of the track, the DRS allows the wings to be flattened out at the push of a button, within a specific operating range. The airbrake function is activated during emergency braking at high speeds: the wing elements at the front and rear are set to maximum, creating an aerodynamic deceleration effect that significantly supports the wheel brakes.

The 4.0-litre high-revving naturally aspirated engine has been further optimised compared with the 911 GT3. The increase in power to 386 kW (525 PS) is achieved primarily via new camshafts with modified cam profiles. The single-throttle intake system and the rigid valve drive are derived from motorsport. The seven-speed Porsche Doppelkupplung (PDK) has a shorter overall gear ratio than the 911 GT3. Air intakes on the underbody ensure that the transmission can withstand even extreme loads during frequent use on track. The 911 GT3 RS accelerates from zero to 100 km/h in 3.2 seconds and reaches a top speed of 296 km/h in seventh gear.

Aluminium monobloc fixed-calliper brakes with six pistons each and brake discs with a diameter of 408 mm are used on the front axle. Compared with the 911 GT3, the piston diameters have been increased from 30 to 32 mm. In addition, the thickness of the discs has been increased from 34 to 36 mm. The rear axle continues to be fitted with 380-mm brake discs and four-piston fixed-calliper brakes.

The optionally available Porsche Ceramic Composite Brake (PCCB) has 410-mm discs on the front axle and 390-mm discs on the rear axle. The new 911 GT3 RS comes standard with forged light-alloy centre-lock wheels. Road-legal sports tyres measuring 275/35 R 20 at the front and 335/30 R21 at the rear ensure a high level of mechanical grip.

Intelligent lightweight construction has been a basic principle of all RS models ever since the legendary 911 Carrera RS 2.7. Thanks to an array of lightweight construction measures such as the extensive use of CFRP, the 911 GT3 RS weighs in at only 1,450 kg (kerb weight according to DIN) despite many larger components. The doors, front wings, roof and front lid, for example, are made from CFRP. Lightweight CFRP is also used in the interior, for example in the standard full bucket seats.

When it comes to its interior, the new GT sports car is finished in typical RS style: black leather, Racetex and carbon-weave finish characterise the purist, sporting ambience. The 911 GT3 RS is available with the Clubsport package at no extra cost. This includes a steel rollover bar, a hand-held fire extinguisher and six-point seat belts for the driver.