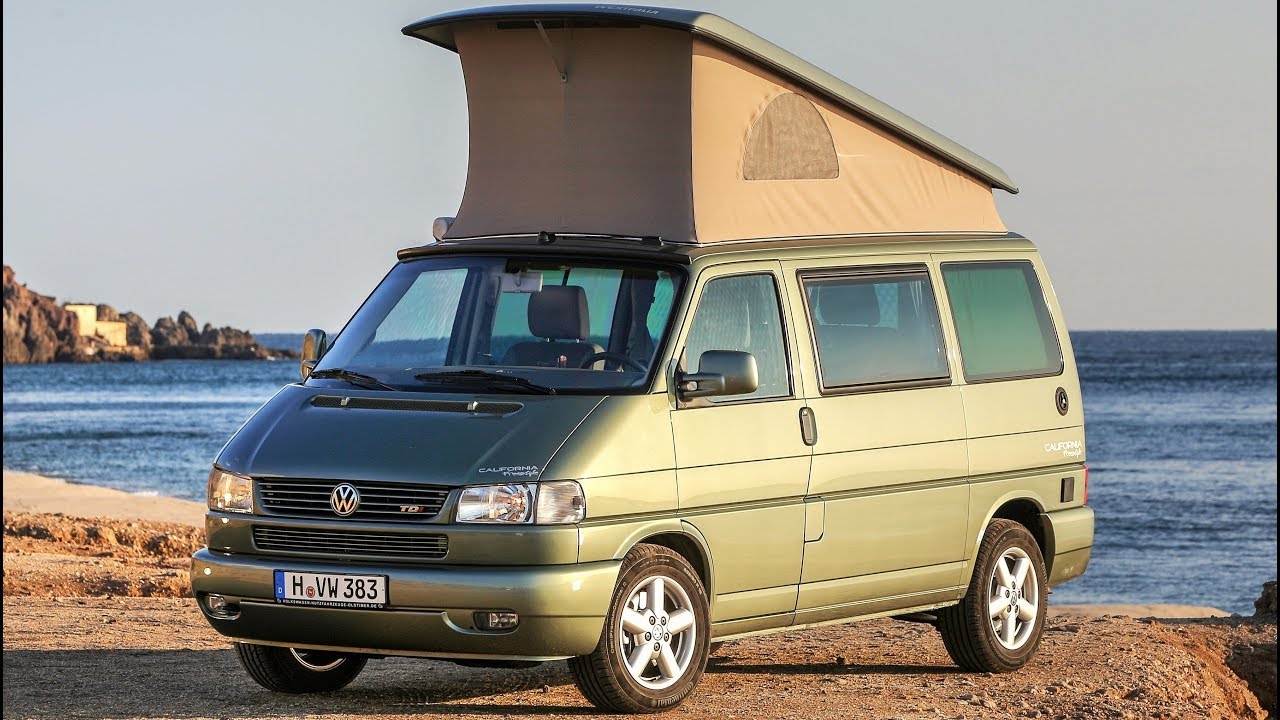 The changeover from T3 to T4 in August 1990 is tantamount to a technical revolution. For, after four decades of rear-wheel drive using flat four engines, Volkswagen’s commercial vehicle specialists simply turned things around: they place the engine at the front and drive the front axle from there. This changes everything: the design, the chassis, the engines and the interior layout. After all, where the flat engine was taking up stowage space in the T3, there is now plenty of room. Admittedly, some of this space is occupied by the new semi-trailing arm rear suspension and the optional
all-wheel drive (‘syncro‘), but the rest can be fully assigned to the cargo space. At the front, however, the T4 becomes longer so as to create sufficient space for the in-line four-cylinder and five-cylinder engines as well as better crash properties.

The T4 also enters its second year of production as a California with pop-up roof. Like the California T3, it is produced at Westfalia. The advertising motifs for the market launch in 1990 feature the slogan: “Hotel California. Quiet location, comfortable furnishings, panoramic view guaranteed.” The Eagles had released “Hotel California” in 1976. And, even 15 years later, the song is still of course the perfect complement for the spirit on board a camper van that had undergone improvements in practically all aspects with the new generation. However, listening to the song itself now requires one of the CD players that are available since, because classics like “Hotel California” are swept off the radio stations in 1976 by the Scorpions with “Wind of Change”.

The ‘Berlin’ layout continues to dominate the area behind the still swivelling driver and passenger seats – and this is good news for space utilisation: kitchen unit and cupboards on the driver’s side, i.e. opposite the sliding door. However, the compressor fridge operated by the auxiliary battery or an external power supply moves further to the rear, with its contents now being removed from the top and no longer via a door at the front. This provides for greater freedom of movement in the seating area. At the same time, the California evolves increasingly into a mobile caravan with high-tech comfort and safety details, including front airbags, electronic differential locks and, for the first time, also ESP and a radio navigation system. Optional features such as a rear shower add to the luxury. From the inside, the two travellers in the rear no longer view the outside world through scratch-sensitive insulated plastic windows but through thermopane windows as standard. The new California is also equipped with a pop-up roof as standard. And once again it remains under the 2.0-metre level so that it is still able to seek shelter in personal garages and public car parks. Available once again is a high-roof version, now with an alcove that projects forwards over the windscreen.

In 1992 the California becomes the California Coach. One of its distinguishing features – as a version with pop-up roof – is the rear window area on the driver’s side now finished in steel, as this is now the position for the cupboard inside. At the same time, two California models with extended wheelbase and high roof (with a type of alcove towards the front) also find their way into the range: the California Club (with sink and cooker at the rear as well as additional cupboards in the passenger’s side) and the California Tour with classic ‘Berlin’ interior layout (similar to the California Coach).

In 1994, a new high-roof version with normal wheelbase makes its debut: to mark Westfalia’s 150th jubilee, the California Highway is produced as a special model limited to 500 units – with a more aerodynamic high roof without alcove and customised equipment. After the “Highway” has sold out, its compact roof is then also offered for the “normal” California Coach. Incidentally, the Eagles report back in the same year and present one of the best live albums of all time with “Hell Freezes Over“, one highlight on which is a 7:12-minute version of “Hotel California“. Meanwhile, a new highlight in the camper van range from 1995 is the California Exclusive with high roof, long wheelbase and a wet room including WC and fold-away wash basin.