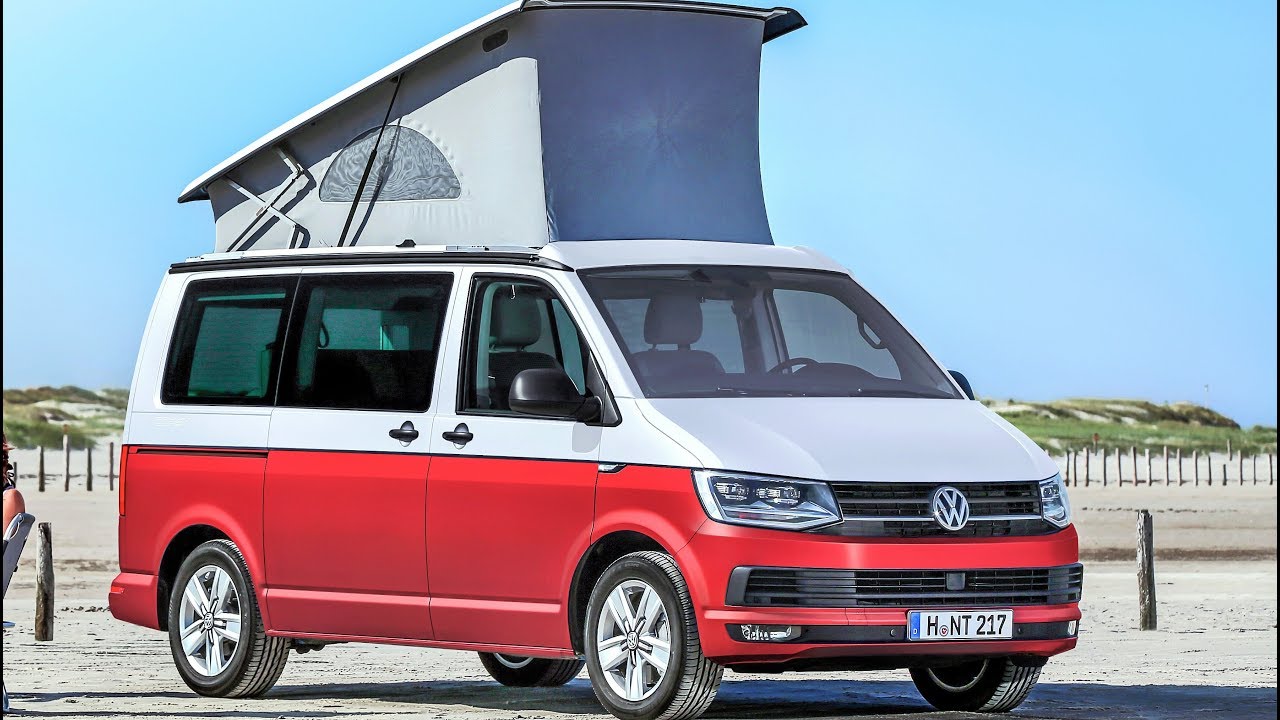 At the market launch in June, the camper van is available in the three equipment lines of “Beach”, “Coast” and “Ocean”. External characteristics are a completely redesigned front section, which with its distinctive unit of radiator grille and LED headlights (depending on installed equipment) transports the design DNA of the California into the modern era. Nothing less applies to the revamped rear with its LED rear lights (also dependent upon installed equipment). Also new are the line-up of wheel designs and the spectrum of colours. Another novelty is the reintroduction of two-tone paint finishes for the first time in decades – in tribute to the T1. In addition, instead of cotton, the bellows are now made of synthetic fabric which is both more water-resistant and tougher.

On the inside, the complete redesign extends to the dash panel. Depending on the version, the cross-panel in the cockpit is also individualised to match the colours of the exterior and bellows. A total of six paint finishes are available for the accent on the dash panel: “Cherry Red”, “Anthracite Metallic”, “Bamboo Garden Green”, “Mojave Beige”, “Acapulco Blue” and “Black Glossy”. New floors in wood look, new fabric and Alcantara-leather covers for the seats and sleeping areas as well as new decor schemes for the kitchen unit and cupboards in “Dark Wood” and “White Wood”) further round off the interior perfectly. This perfection also extends to the fine detail of the California T6: improvements have been added, for example, to the guides of the window blinds and sliding doors; a magnetic flashlight in the base of the front passenger’s seat is charged in situ during the journey and doubles as a nightlight.

Setting the technological scene for the new California is a range of even more economical engines, new infotainment systems with smartphone integration via app (App Connect for Apple and Android) as well a whole host of assistance systems. The latter include the Front Assist area monitoring system together with City Emergency Braking, the Automatic Post-Collision Braking System to prevent secondary collisions, the Driver Alert System, Adaptive Cruise Control (ACC), Hill Descent Assist (for 4MOTION), the automatic main beam control ight Assist and the lane change system Side Assist.

As a further new feature starting in 2016, the bellows of the pop-up roof can be ordered in red (“Strawberry Red”) and blue (“Glacier Blue”) as an alternative to grey (“Alpine Grey”). In 2017, Volkswagen Commercial Vehicles also introduces further new developments to the iconic camper van. New on board now is the optional “Camper interior light concept”. The exclusive “Ocean” equipment version additionally includes ambient lighting (around the kitchen block) lighting in the wardrobe and lower cupboard as well as LED lighting for the tailgate and the bedroom inside the pop-up roof. In addition to this, extra storage compartments, new towel rails and a glass work surface now split into three rather than two sections (suitable for use as an additional draining board when using the sink) over the fridge, gas cooker and sink improve the utility of the kitchen designed carefully down to the finest detail. The continual optimisation of the California, now on offer in its fourth generation, is reflected in its sales
figures: in 2017, the California T6 sets a new sales record with 15,155 new vehicles delivered. To date, sales of the latest generation California total 37,000. As already mentioned, this makes 157,500 units since the premiere of the first California T3. Yet there is one thing that these figures signify above all else: a tremendous number of summers spent in a spirit of happiness and freedom.