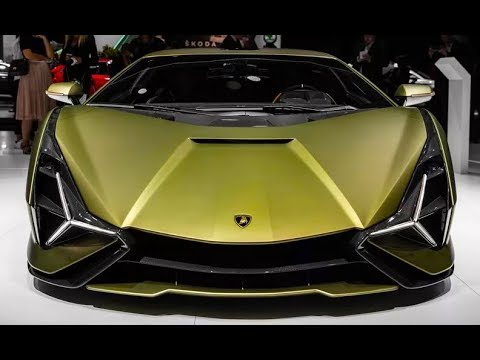 Lamborghini Sian FKP 37 – 819 hp Most Powerful Lamborghini Ever. Stuffing a hybrid powertrain into an exotic, scissor-doored Lamborghini has gone from being utterly unthinkable to being wholly inevitable in a few short years. Called Sián, the Bolognese word for flash or lightning, the Italian company’s first series-produced gasoline-electric model has arrived, and it’s even wilder than we hoped.

On paper, the Sián looks a lot like a regular hybrid in the sense that it gains an electric motor, and a source of electricity. The similarities stop there, however. The electric motor is a 48-volt unit stuffed between the engine and the transmission, and it draws power from a supercapacitor instead of a more common lithium-ion battery pack. Lamborghini already showcased its supercapacitor technology on the Terzo Millennio concept unveiled in 2017; it’s a device that charges as quickly as it discharges, so it provides an intense power burst for a short amount of time.

The electric motor contributes merely 34 horsepower to the Sián’s 819-horse output. The rest comes from a naturally aspirated V12 engine that delivers 785 hp to the four wheels. Additional technical specifications (like the engine’s displacement and torque output) remain under wraps, but it’s clear that adding a degree of electrification to its powertrains will help Lamborghini make a case for building a big, fuel-thirsty 12-cylinder engine during the 2020s.

The motor drives the Sián on its own at a crawl, such as when parking. It works jointly with the V12 in normal driving conditions, and it makes its presence known by keeping power flowing to the wheels even as the automatic transmission changes gears. Lamborghini pegs the Sián’s zero-to-60-mph time at 2.8 seconds, and its top speed at 220 mph.

The limited-edition, carbon fiber-bodied coupe looks the part, too, thanks to a low slung design that points to the direction Lamborghini’s design department will take as it renews the company’s range during the 2020s. Stylists used the obscenely futuristic Terzo Millennio concept for inspiration, but they also looked at historic models, like the Countach.

It’s not just the drivetrain that’s high-tech; the interior is, too. The Sián isn’t a mass-produced model, so Lamborghini leveraged 3D-printing technology to make some of the parts in the cabin. Poltrona Frau leather contributes a touch of old-school craftsmanship, but the touchscreen on the center console displays the forward-thinking infotainment system that Digital Trends praised as quick and gorgeous when we experienced it in the Huracán Evo.

The Sián is a limited-edition model, and it’s already sold out. Collectors and enthusiasts reserved the 63 available examples before the model made its public debut online. Buyers seeking a hybrid Lamborghini aren’t entirely out of luck, because the hybrid powertrain is widely expected to find its way into the Aventador‘s successor due out in the early 2020s.